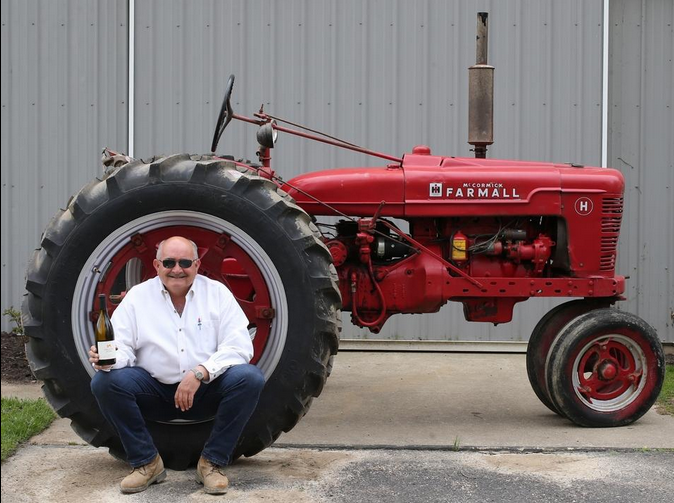 
New Philadelphia resident Jim Demuth has two day jobs. Not that unheard of for anyone in this day and age, and especially for a guy who grew up on a 500-acre dairy farm in Ohio.

But Demuth is different, and loves to put in a full day of work. I managed to get in touch with him a couple of weeks ago while he was moving boulders along Doan Creek next to the Cleveland Museum of Art.

Demuth’s main job is owner of Tucson Inc., an environmental services company. Four days later, I met him at day job number two, where he makes wine in the beautiful Alexander Valley in Sonoma, California.

Demuth was barrel tasting cabernet with his winemaker Mike Gulyash and managers from the prestigious Beckstoffer Vineyards.

The wine country gig came about in 2012, five years after he lost his wife, Molly, to colon cancer. Demuth’s old Ohio State college roommate, Jack Seifrick, convinced him to get out of town and go to wine country.

“Jack kept calling,” said Demuth. “He kept saying, ‘All your kids are in college, and you’re in that small town. You need something else to do.’ He said, ‘Let’s go to wine country.’ I don’t know a lot about wine, but I said OK, and we went to Napa and Sonoma county.”

Up until now, the 1982 Ohio State graduate was strictly a Canadian Club drinker. A stop at Hartford Family Winery in the Russian River area of Sonoma County was a turning point on the trip.

“I was wandering around wine country trying to figure out which wine I liked,” said Demuth. “Then I fell in love with their old vine zinfandel.”

Thirty days after his first sip in wine country, Demuth and Seifrick purchased property on Dry Creek Road in Geyserville, and started Cast Wines. Both were managing partners at Cast until 2014 when Demuth branched out and started his own label called Gregory James wines.

Demuth remains a limited partner in Cast Wines, and has purchased a 50-acre ranch nearby on West Side Road in Healdsburg. He is exploring whether or not to fully develop the ranch into a vineyard, winery and tasting room property.

In the meantime, Gregory James wines is producing about 1,000 cases of some pretty awesome vino. In a short time, Demuth has managed to buy grapes from the Who’s Who of grape growers in all of wine country. His pinot noir is made from grapes grown in the famous Bacigalupi Vineyards. The old vine zinfandel comes from ancient vines tended by Joe Ramazzotti.

Next year, Gregory James will feature a cabernet from Beckstoffer Vineyards. A pretty amazing feat in such a short time. “We’re going to do it right, or we’re not going to do it at all,” said Demuth.

I had the pleasure of tasting these wines on several occasions. Pleasure is an understatement. Demuth has impeccable taste to say the least. Gulyash got his start at Jordan Vineyards, and has 36 years of winemaking on his resume. His experience is helping Gregory James uncork success.

Gregory James wines are distributed by Akron-based Bottle to Glass distributors. They arrived in Ohio in mid-April and are making their way into stores and restaurants. There is no wrong choice in my opinion. The most affordable and available are the Patchy Fog pinot noir and the Carreras Ranch old vine zin.

The 2014 Patchy Fog is a stunner. It drinks like a special occasion wine, but is priced for all to enjoy. The velvety, rich bing cherry flavors are a real wow factor. You’ll savor every drop. Goat cheese on a cracker topped with cherry spread was my favorite to pair it with. This has to be one of the best $19.99 pinots on the market.

The grapes from the 2015 Careras Ranch old vine zin come from the Dry Creek Valley where zin is king. The rich berry flavors will not disappoint. This was a amazingly food friendly wine. I had it with pizza, pasta bolognese, and all the accompaniments of a Diavola Pizzeria & Salumeria (in Geyserville, California) charcuterie board.